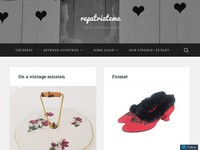 At the time of starting repatriateme.com, the repat is in between countries. The decision has been made: She is leaving her temporary-for-10-years country Luxembourg to go back to her native and beloved Norway, with hubby and two girls who have gotten really big while they’ve been away. The girls that is…

She will write about that in-between state, about the leaving and the coming home, and about the inevitable reverse culture shock. Changed and unchanged, expected and unexpected, familiar and unfamiliar, loss and gain.

She will write in both English and Norwegian, hoping that fellow repats, or ex-repats, or expats who might become repats, or just anyone who would enjoy her writings and topics, will find their way to this site. And maybe the odd Norwegian who could benefit from seeing the country through the keyboard of someone who’s been away for a long time.

The repat has a journalist background.

Ask your questions to expatriates, give your tips, participate to the community on the Forum


The latest messages on the expat forums - Luxembourg

- My Life Abroad -
A selection of expat stories

More on the book >